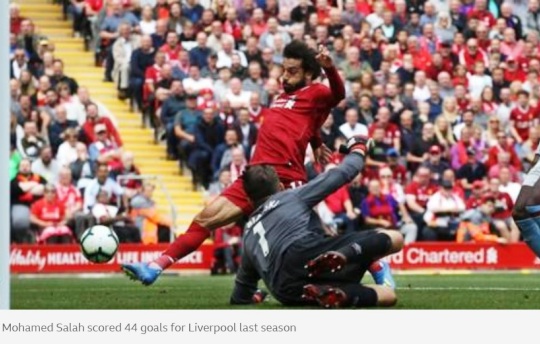 Jurgen Klopp described Liverpool's emphatic victory over West Ham as "better than I could have expected" before warning his team face an "unbelievably hard" season.

The Egyptian tapped in a 19th-minute opener from Andy Robertson's cross on his return to action for the Reds at Anfield.

"West Ham will play, for sure, a good season but they are not the Uniteds, the Citys," Klopp said. "We know that and we have to be ready week in, week out for all the challenges."

It took the visitors almost half an hour to fashion a chance of note as they struggled to stem the Liverpool attacking tide.

New Reds goalkeeper Alisson, signed for £66.8m from Roma in the summer, comfortably saved a Fabian Balbuena header, one of only two efforts on target for the Hammers.

As the pressure built, the hosts doubled their advantage when Sadio Mane turned in James Milner's cut-back after being left unmarked six yards from goal.

The Senegalese forward added his second and Liverpool's third early in the second period. Mane appeared marginally offside as he collected Roberto Firmino's pass, but the flag stayed down and he drilled his effort beyond new West Ham goalkeeper Lukasz Fabianski.

He contributed to Liverpool's first goal and delivered the kind of driving performance that Steven Gerrard once produced wearing the number eight shirt.

Substitute Daniel Sturridge rounded off the scoring with his first touch, 24 seconds after coming on, to ensure Liverpool recorded their 500th victory in the Premier League era.

It also maintained their fine Anfield record against West Ham, who have now won just one of their past 46 top-flight visits.
Posted by SEO Services in London | 04:50 | Labels: London News, Sports News | No comments