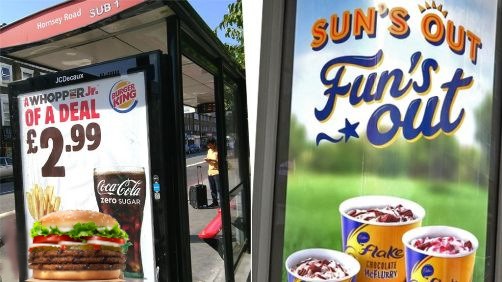 A ban on junk food advertising across London's entire public transport network has come into force.

Posters for food and drink high in fat, salt and sugar will begin to be removed from the Underground, Overground, buses and bus shelters from Monday.

Some adverts for unhealthy products could remain on the network for a while as some companies have booked advertising space for long periods.

All future bookings are subject to the new policy, Transport for London said.

"We've already seen large advertisers confirm they will continue to advertise on the TfL network under the new rules - by advertising their products that are not too high in fat, salt and sugar," TfL said.

London Mayor Sadiq Khan said he wanted to tackle the "ticking time bomb" of child obesity in the capital.

However, the Advertising Association said the ban would have "little impact on the wider societal issues that drive obesity".

Where will the ban apply?

In addition to the buses, Tube and train networks run by TfL, junk food adverts will be banned on:


After plans were first announced in May, 82% of 1,500 respondents to an online consultation backed the proposals, City Hall said.

A spokesperson for the mayor said: "The mayor is confident these changes will not only reduce children's exposure to junk food advertising, but also empower Londoners to make healthier food choices for themselves and their families."

They said Mr Khan was "doing what he can with the powers he has, but is clear this is not a silver bullet that will solve this problem overnight".

The Advertising Association said commuters could suffer as a result of the ban.

Chief executive Stephen Woodford said the UK already had "the strictest rules in the world when it comes to advertising high fat/salt/sugar foods", which meant under-16s could not be targeted.

"This will lose revenue from advertising for TfL and that will potentially have an impact on the fares that passengers have to pay," he said.
Posted by SEO Services in London | 12:44 | Labels: Local News, London News, UK News | No comments