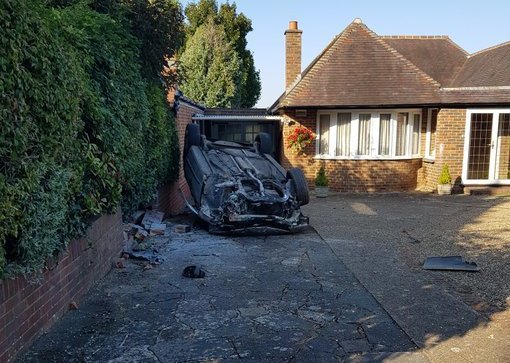 Two men have been arrested on suspicion of burglary after a dramatic pursuit ended in agetaway car flipping over on a Sutton driveway.

Surrey police were called to Banstead Road at 4.15pm on Sunday after a number plate associated with a burglary in Elmbridge was recognised by police cameras.

The suspects failed to stop after a short pursuit, eventually flipping the car over on a residential driveway before escaping on foot.

Officer from Surrey, Redhill and Sutton then began a search, supported by a police dog unit and helicopter.

The suspects were tracked down with the help of residents, who provided detailed information as to where they fled.

Both men were bailed under conditions not to enter Surrey.

A third occupant of the vehicle was not arrested.

A spokesperson for Surrey police said: "Late yesterday afternoon officers from Surrey Police road policing unit and Reigate and Banstead's very own neighbourhood policing team, responded to an ANPR hit on a vehicle involved in a burglary on Elmbridge Beat (Surrey Police's) patch.

"After a short pursuit, the vehicle failed to stop in Metropolitan Police Service area, and with the assistance of National Police Air Service Redhill, Sutton Police, very helpful residents and a Surrey Police dog unit, we have two arrested for a variety of driving offences, and burglary."
Posted by SEO Services in London | 12:14 | Labels: Local News, London News | No comments