Gymnastic duo in funding appeal to help compete around the world 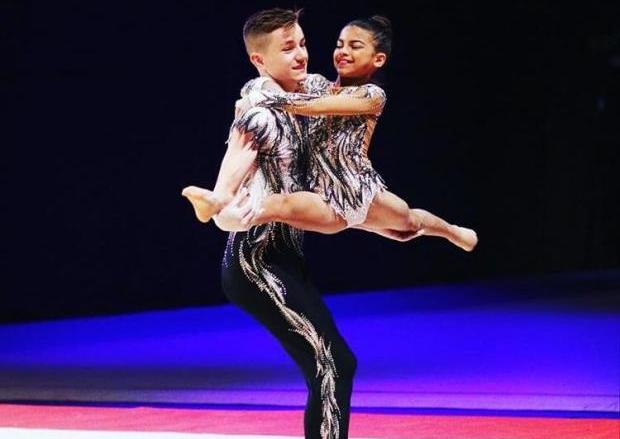 Two elite teenage gymnasts are appealing to the public for help in funding their ambitions to compete for Great Britain.

Henry Godfrey, 14 from Twickenham and his 11-year-old gymnast partner, Keira Follett, from Hillingdon, are two young talented in acrobatic gymnastics.

Both students dedicate their spare time in order to train for six to seven times every week - before and after school.

But the flexible duo are ready to take things to the next level, and are looking to raise at least £6,000 to help them travel around the world to compete.

Henry's mum, Jo Godfrey, said: “The money is needed for routines, leotards and other expenses.
“They work so hard and they are brilliant kids.

“We just want to make sure they do their best.”

Once the funds have been raised – it will mean that their championship journey will begin in Israel where they will sit as reserves for the European Championships.

This means the pair will need to step in to represent Great Britain (GB) should anything happen to the original GB gymnasts during the competition.

Keira said: “This is a huge achievement for us to even be selected, we train really hard and to actually compete and wear the flag for Great Britain would be a dream come true.

“I love wearing the beautiful leotards and showing our new skills to everyone and if we can win a medal too – it just shows that our training has paid off.”

The duo then head to Mexico in November where they will represent Great Britain in the World Championships.

In January 2020, the gymnasts make their way to Switzerland where they will go through a series of trials to see if they will be selected to represent Great Britain in the World Championships 2020.

Henry added: “We put so much time and effort into our sport and it is a dream come true to be selected to compete for Great Britain.

“We have only been together for just over a year and work so hard.

Henry and Keira also hope to qualify to compete in the 2020 Acrobatic Gymnast World Championships in Switzerland in January.

“Balancing training, school and a life outside of all this is difficult but the reward that we have now achieved to be competing for our country makes me feel just so proud of all our hard work.”

To find out more or to donate visit: https://www.gofundme.com/help-keira-and-henry-compete-for-great-britain
Posted by SEO Services in London | 12:43 | Labels: Entertainment, Local News, London News | No comments