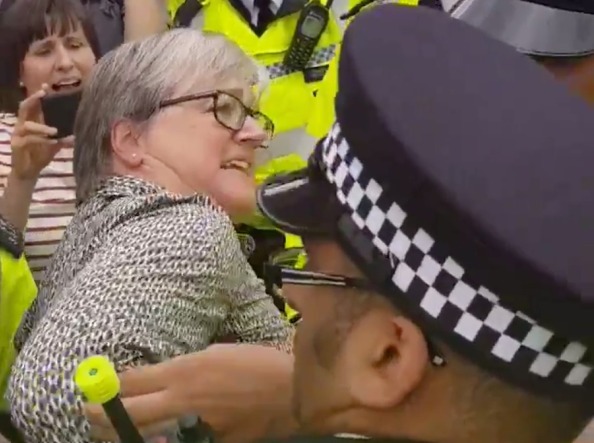 A London Assembly member has been arrested while protesting against the planned shutdown of parliament.

Green member Caroline Russell was allegedly blocking a road when she was led away by police.
The Islington councillor was among tens of thousands of demonstrators who took to the streets after the Prime Minister announced a month-long break at Westminster.

Under Mr Johnson’s plans, the current session of parliament will end on a date between September 9 and 12, and reconvene on October 14.

The Government claims that ending the current session - the longest since the English civil war – will allow it to focus on its domestic policy agenda.

But protestors say it will limit the time MPs have to debate Brexit and table legislation to prevent a no-deal exit on 31 October.

Video footage of Ms Russell’s arrest at the demonstration shows a group of police officers attempting to handcuff the assembly member, to chants of “Shame on you” from protestors.

Fellow Green assembly member Sian Berry – also co-leader of the Green party, and London mayoral candidate – said she was “proud” that Ms Russell was defending democratic rights.
She said: “History tells us that all the rights we have we had to win. No one has ever handed them to us.

“Caroline and the others on the streets in London today were defending those hard-won rights that are now under attack from Boris Johnson.

“We, the people, will come back on the streets again and again in the coming weeks of national crisis to defend our MPs and win our final say.

“We will keep saying to Boris Johnson, to Jacob Rees-Mogg, to Dominic Raab – your actions do not represent us.

“If you abuse power, we the people will make sure you won’t be in power much longer.”
Posted by SEO Services in London | 13:32 | Labels: Local News, London News | No comments