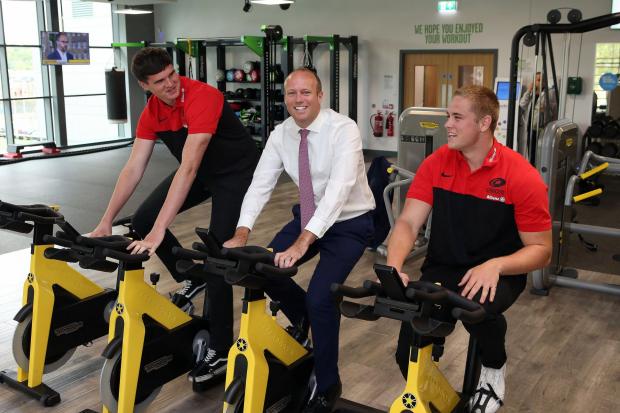 Rugby players and local politicians attended the official opening of a state-of-the-art leisure centre this week.

New Barnet Leisure Centre, in Lawton Road, is the result of almost £45 million of investment by Barnet Council into two new health and fitness facilities.

Located within Victoria Recreation Ground, the facility replaces Church Farm Leisure Centre, which was built in 1960.

Mayor of Barnet Cllr Caroline Stock, Saracens RFC players and councillors from both parties were given a tour of the facilities at the opening ceremony on Monday (September 9).

The leisure centre boasts the latest technology, including virtual fitness classes that allow people to take part in sessions when an instructor is not present.

Built-in screens on fitness machines allow users to flick between TV, music and work-out data while they train.


Council leader Dan Thomas with Saracens players Cameron Boon (left) and Tobias Munday
The 25m swimming pool has the latest wheelchair-accessible equipment and is cleaned using ultraviolet light – cutting down on the use of chemicals.

New Barnet Leisure Centre has been designed to blend in with its surroundings, and the fitness rooms offer scenic views out over the park.

There is a café open to members and non-members, as well as an on-site library due to open on September 24.

The leisure centre is a ‘cashless’ facility, with payment by credit or debit cards, while residents can gain discounts and other benefits using Fit and Active Barnet cards.

Members of Saracens rugby club said combining a leisure centre and library on one same site would help youngsters to train while studying for their exams.

Saracens player Tobias Munday said: “It is such a good place for the community – a hub where people can get together and best themselves physically and mentally.”

Team-mate Cameron Boon added: “The library is a massive thing for me. If you are physically fit and mentally able, for me that is the key to happiness.”

Cllr Felix Byers (Conservative), East Barnet, said: “There has been this immense build-up of anticipation about the leisure centre – a lot of excitement and expectation. I think people’s expectations have been exceeded.

“It has changed the character of the park and created a more vibrant area.

“I always wanted to join a gym – now it has happened I don’t really have an excuse not to!” 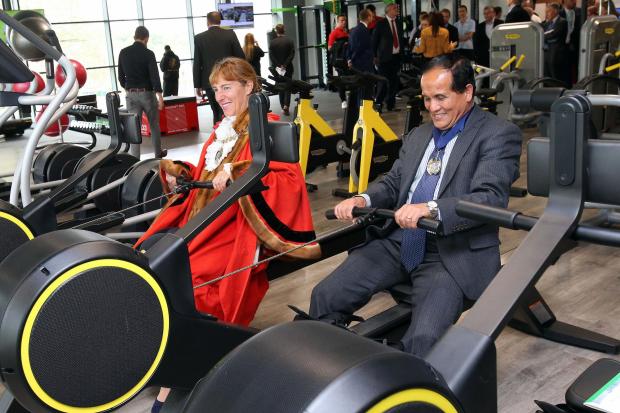 Mayor of Barnet Caroline Stock and Deputy Mayor Lachhya Gurung try out the rowing machines
Cllr Laurie Williams (Labour), East Barnet, added: “It is rather wonderful. When I was elected in 2014, the leisure centre was just being thought about, and I was one of the people who campaigned to have it on this site.

“As a council, we should all work together for the community. I am very pleased with it.”
New facilities have also been provided at Barnet Copthall and other leisure centres in the borough thanks to the council’s investment.

Leader of Barnet Council Cllr Dan Thomas (Conservative) said: “I’m delighted that we’ve been able to invest in the health of our residents at a time when councils are making savings.

“This new leisure centre is another example of how the council is investing in community facilities, ensuring Barnet remains a great place to enjoy sport and fitness.”
Posted by SEO Services in London | 12:43 | Labels: Local News, London News | No comments