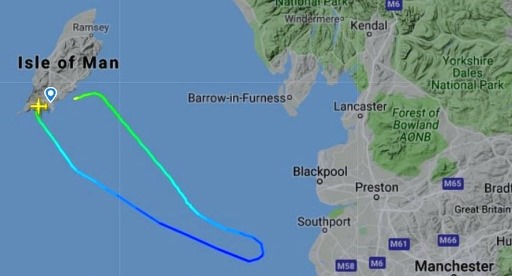 A plane flying from the Isle of Man to London had to make an emergency return to the island after its windscreen cracked.

Loganair's BA Cityflyer flight to London City Airport left at 13:27 GMT but had to turn around over the Irish Sea and landed again at 13:57.

Loganair said none of the 22 passengers or three crew on board the 50-seat Saab 2000 plane were injured.

A Manx government spokesman said all passengers had "disembarked safely".
He added that they would be "updated regarding onward travel".

A spokesperson for Scottish airline Loganair said: "Shortly after take-off the captain detected a fault with the outer panel of the left windscreen and, as a precaution, returned to Isle of Man Airport where the aircraft landed safely.

"As per procedure in such circumstances, the airport placed its emergency vehicles on standby and passengers were transferred onto an alternative service. Loganair would like to apologise for the inconvenience but reassure its customers that safety is our number one priority."
Posted by SEO Services in London | 02:14 | Labels: London Services, Travel News, UK News | No comments