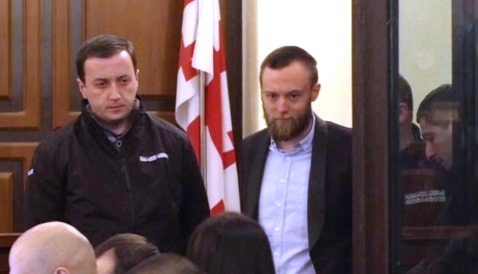 The letter, which tells him to "remember Jo Cox", the Labour MP murdered by far right extremist Thomas Mair, has been passed to the police.

It talks of stabbing, bombing, features a swastika and the words "Heil Hitler".

As a defence solicitor representing Shepherd, Mr Egan has received a steady stream of abusive and threatening letters, emails and texts accusing him, among other things, of having blood on his hands.

He did not take them especially seriously until he received a letter, sent to his office, which warned him he had 48 hours to state that he was "no longer supporting or providing legal aid" to Shepherd and saying, "remember Jo Cox?"

"You have been followed - nice house! Now, accidents happen, people get stabbed in London, pets get poisoned, children run over.

"Be warned we (EDF) will petrol bomb your nice office."

It also contained a swastika, SS sign and the words "Heil Hitler 88".

Mr Egan says this was of a "different order".

"It threatens my family. It suggests that I have been followed and that the writer knows where I live and where I work.

"There is a specific threat to firebomb my firm, endangering the lives of my colleagues."
The letter has been passed to the police who are investigating.

Mr Egan believes some press coverage of the case has misrepresented the role of defence solicitors, legal aid and the wider justice system and he says this has led to a climate of hate towards the defence team.

In his 25 years acting in some of the most high-profile cases before the criminal courts, Mr Egan says he has never known a reaction as fevered as the one in Shepherd's case.

"Defence lawyers have a role to play. Our system is based on the principle that all those accused by the state are entitled to legal representation. That is all I provide.

"The jury, directed by the judge, decides whether someone is guilty or not. In this case there seems to have been an attack on the role of the defence lawyer itself," he says.

Last July, Shepherd, now 31, was convicted in his absence at the Old Bailey and sentenced to six years for the gross negligence manslaughter of 24-year-old Charlotte Brown.

She died following a speedboat crash while on a date with Shepherd on the River Thames in December 2015.

The two met on the dating site OkCupid. Shepherd spent £150 on wine and food at a restaurant in The Shard before taking her on a speedboat he claimed he owned.

Ms Brown and Shepherd were thrown from the boat when it hit branches in the water near Wandsworth Bridge at about midnight.

Shepherd was found clinging to the hull and Ms Brown, from Clacton in Essex, was pulled from the water unconscious and unresponsive.

A post-mortem examination found she died from cold water immersion.

Shepherd had been in the Georgian capital of Tbilisi since March and was absent throughout his trial.

He handed himself in to Georgian police last week and, following an initial hearing, has been remanded in custody pending a full extradition hearing. His Georgian lawyers have indicated that there are grounds to fight extradition.

Despite having gone on the run, Shepherd won the right to appeal against his conviction.
Legal representation

Barristers operate on what is known as "the cab rank rule", meaning that, if they are available, they must represent anyone who asks them, however, solicitors can refuse to take on a client.

Barristers and solicitors are bound by professional obligations once they take on a client. These include acting when a convicted defendant seeks leave to appeal their conviction.

The defence lawyer's duty to represent a defendant does not fall away because they abscond.

In Shepherd's case the court, Crown Prosecution Service and police were informed he had absconded.

The CPS had an option to adjourn the trial until he was found and brought to court, or to proceed in his absence.

It chose to go ahead and the judge agreed.

Mr Egan says the intensity of the news coverage and the abuse and threats increased when Shepherd was granted the right to appeal.

The legal team did not know Shepherd's whereabouts during the trial or appeal application.

The decision by the Legal Aid Agency to grant Shepherd legal aid drew particular anger, with many people concerned that his appeal would be funded by legal aid while he was on the run.

Officials are reviewing what has been described as a "loophole" in the legal aid system.

But lawyers stress it is part of our fair trial system that a defendant has the right to seek an appeal if they believe something has gone wrong in the trial. That is why legal aid extends to cover an application to appeal. That application is determined by a single judge.

Mr Egan points out that an appeal is not a retrial of the evidence, it is restricted to errors of law.

About 90% of applications for an appeal fail, so the fact that Shepherd's succeeded indicates that there were sufficient grounds to argue that his conviction was unsafe.

Mr Egan makes the point that in our system, appeals are not earned by good behaviour nor denied to those who are disliked.

Only the barrister gets paid from legal aid for an appeal, but in this case Stephen Vullo QC has taken the unusual step of writing to the Court of Appeal to say that he will act for no fee.
"Richard received a death threat which I thought was credible and quite frankly appalling," he says.

"He has been misrepresented in the press as somebody acting for the purposes of obtaining money.

"In fact he would receive no fee for the appeal. Only I would receive a fee. So I decided, against his wishes, to say I won't claim my fee so therefore, the defence cost in legal aid will be zero."

Lord Thomas is clear that: "You simply can't have a fair trial without a lawyer who is prepared to put the defendant's case.

"What is essential is that we do nothing to undermine the position of such lawyers. In fact this case has gone far further than I have ever seen, namely making a death threat.

"That is not merely a crime in itself but a fundamental attack on our values as a society and hence the rule of law."

And Law Society president Christina Blacklaws said: "Lost in the media frenzy surrounding the Jack Shepherd case is a fundamental principle of British justice, that regardless of the crime, the accused is entitled to legal representation, and the government has a statutory obligation to ensure this happens where required.

"If a client maintains their innocence, it is absolutely essential that a defence representative can challenge a case brought by the state."
Posted by SEO Services in London | 02:12 | Labels: Crime, London News, London Services | No comments