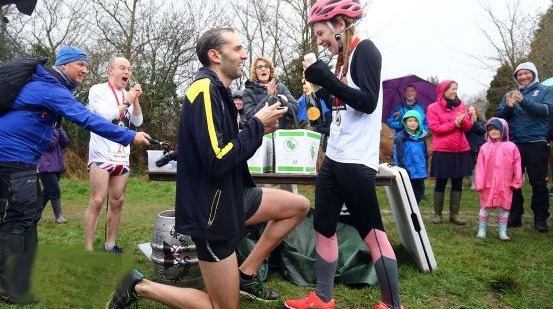 The winning couple in the annual UK Wife Carrying Race are enjoying a double celebration after a marriage proposal on the finish line.

Chris Hepworth and Tanisha Prince, both 28, from West Drayton, London, endured treacherous and slippery conditions on the course in Dorking, Surrey.

The couple also won the race last year, and will now go on to enter the world championships in Finland.

Dozens of couples braved the wind and the rain to take part.

Most couples opted to race in what organisers call the "Estonian hold" position, which involves the person being carried hanging upside down on the carrier's back with their thighs dangling on to their chest.

They had to clamber over hay bales, go up and down a hill and have buckets of water thrown in their faces while they raced over the 380m-course.

Mr Hepworth sprung the surprise after being presented with the trophy beer keg on the finish line, saying his partner had been an "amazing wife to carry", but that he wanted to go to Finland as a proper married couple.

Ms Prince said: "He woke up with bad ribs and I was trying to persuade him not to run."

Race organiser Rob McCaffrey said the proposal was a first for the wife carrying race.

Wife carrying originated in the UK over 12 centuries ago, on 8 June 793AD, when Viking raiders rampaged into Lindisfarne, destroying the monastery and most likely carrying off any unwilling local women.
Posted by SEO Services in London | 12:49 | Labels: Lifestyle, London News, UK News | No comments