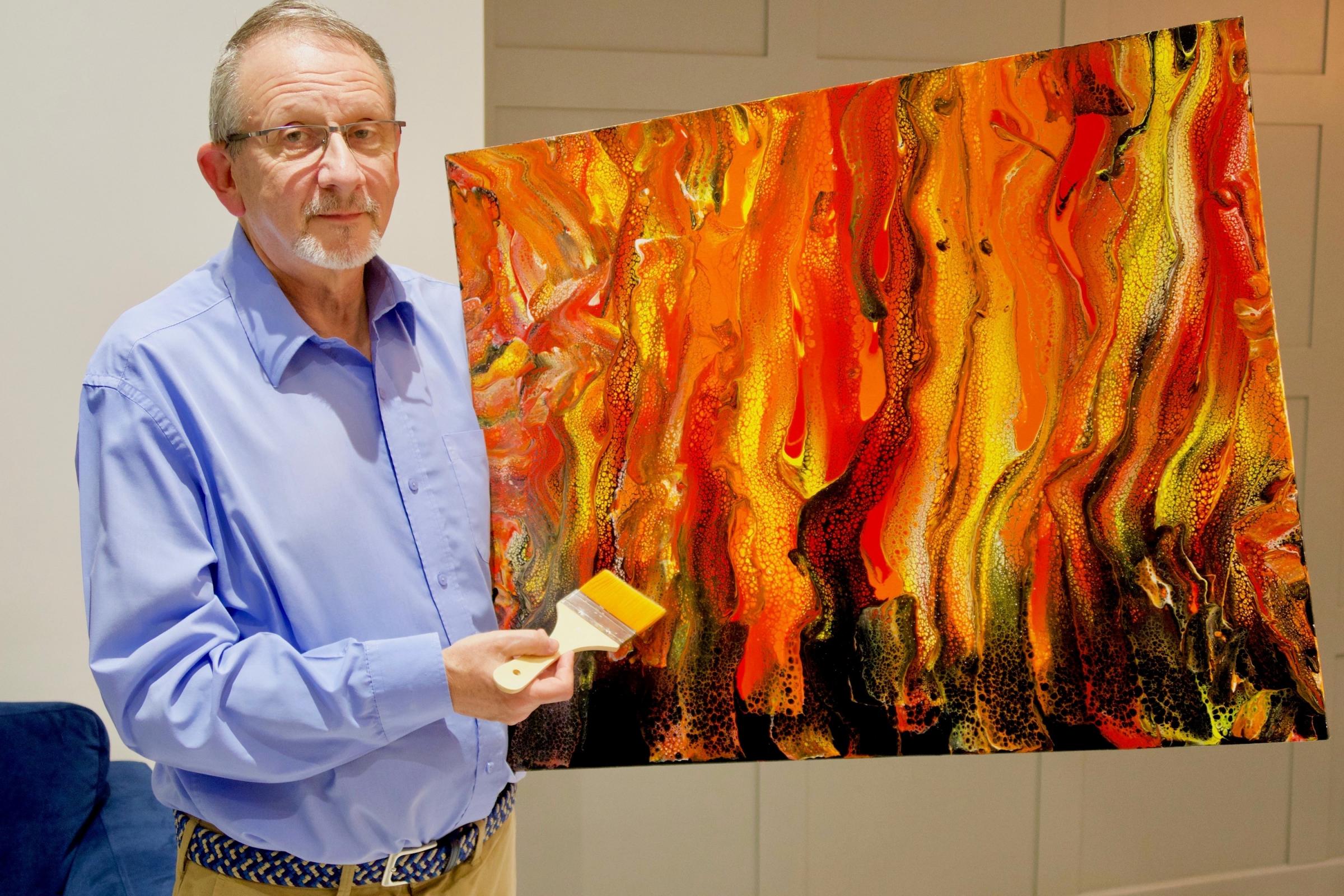 An abstract artist from Borehamwood has become a hot prospect in the art world after he visited one of the world’s most active volcanoes in Hawaii.

Ian Cooper treated his wife, Helene, to a romantic holiday on the Pacific island to celebrate their wedding anniversary and took a tour to see Kilauea volcano.

Its explosive lavas and colours inspired him to create a vivid painting using fluid acrylics – which has just won him recognition in a major international art competition.

Ian, 65, entered his picture, titled ‘Volcanic Inferno’, in the 2019 Pebeo Mixed Media Exhibition competition, which has attracted more than 1,000 submissions from 100 countries.

Judges this week chose his work as one of just 100 shortlisted paintings, which means Ian will be exhibited at a top London gallery and is in with a chance of sharing a £6,000 prize money pot.

The accolade couldn’t have come at a better time for the talented Hertfordshire artist, whose wider portfolio of multi-coloured artworks is also set to go on display in Radlett throughout September.

The Radlett Centre is staging a month-long exhibition of his work, opening on Monday, September 2, when 25 of his paintings, including for a temporary period ‘Volcanic Inferno’, will go on view to the public, many of them also for sale.

Ian said: “My wife and I found Kilauea hugely impressive. The sight of it inspired me to create the painting, which is one of my personal favourites. With its vibrant fluid acrylics, it almost radiates heat. For me, its cells are like flaming-hot lava.“I was flattered and shocked to be shortlisted for this international art prize. It’s doubly good news because I’m just about to also stage my first exhibition at the Radlett Centre.”

Bright, hot colours with strong contrasts are the hallmark of Ian Cooper’s abstracts and much of his distinctive style is due to his experimental use of fluid acrylics with his own personal technique of creating controlled cells.

A selection of his originals and prints will be exhibited at The Radlett Centre, Aldenham Avenue, Radlett (radlettcentre.co.uk) from Monday, September 2, to Saturday, September 28.
Posted by SEO Services in London | 10:07 | Labels: Local News, London News | No comments