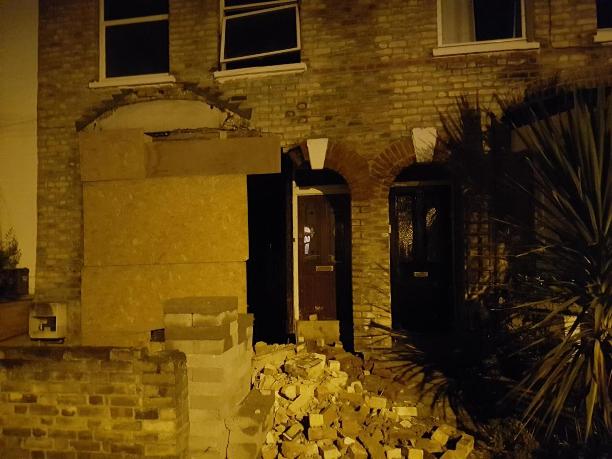 An investigation will take place after part of the front wall of a house collapsed.

Neighbours were shocked to find brickwork at the front of 74 Holly Park Road, Barnet, a Victorian terrace, had fallen down during the evening of Sunday, August 18.

Contractors for the council have put up scaffolding to support the brickwork.

Local resident Harry Gluck said one of the neighbours was walking along the other side of the road when he heard the brickwork fall.

Mr Gluck said: “That part of the pavement is used when kids go to school. Had this happened in school time, it could have come crashing down on top of them.

“The council have now put scaffolding around it.”

In September last year, the council granted permission for a basement extension to be built at 74 Holly Park Road going beyond the rear of the house, in addition to a ground floor extension.

In May this year, it granted permission to convert the property into three self-contained flats, including a “part single, part two storey rear extension at basement and ground floor levels”.

No link to the building work has been established.

A Barnet Council spokesman said: “The council’s Building Control team responded to reports of a partial collapse of brickwork to the front of a property.

“Council contractors have put in place structural scaffolding to support the brickwork and the site has been secured.
“The cause of the partial collapse will be a matter to be investigated by the private sector approved inspector for the scheme and the contractor.
Posted by SEO Services in London | 08:11 | Labels: Local News, London News | No comments