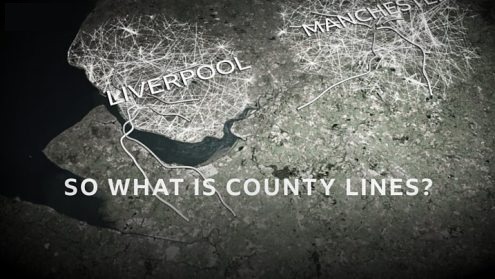 A man viewed by the Met Police as one of London's most dangerous criminals has been jailed for killing another man over a county lines dispute.

Gaille Bola was found guilty of the manslaughter of Meschak dos Santos Cornelio, 18, who was stabbed to death on New Year's Eve in 2017.

He was jailed at Blackfriars Crown Court for 21 years.

Bola was described by police as a "violent, vicious and dangerous" man.

The 22-year-old, who went by the street name "G", groomed Mr Cornelio into the notorious Get Money Gant (GMG) he ran in north London.

In the months before Mr Cornelio was stabbed, he had been running one of the lines while Bola was in prison for a knife offence.

After Bola was released he wanted the "drugs line" back and Mr Cornelio's refusal led to friction between the two men.

On the morning of 31 December, 2017, Bola went to a flat on Larmans Road, Enfield, where Mr Cornelio had been staying.

An attack ensued with Bola stabbing Mr Cornelio in the chest. He was airlifted to hospital but died later that day at 20:28 GMT.

Bola surrendered himself to Wood Green Police station on 8 January and was charged with Mr Cornelio's murder.

He was found not guilty of murder at a trial at the Old Bailey in July, but the jury could not reach a verdict on manslaughter.

After a retrial in November, a jury unanimously found him guilty of manslaughter. He was sentenced on Thursday and jailed for 21 years.

Bola was ordered to serve a minimum of 14 years in prison and an extra three years on licence.

Following the conviction, Det Sgt Brett Hagen said "Bola is high up on the gangs matrix, of the 3,500 people on it he's in the top 10."

"He openly bragged in court about making £1,000 a day from his county lines.

"He went to the property that morning intending to steal a drugs line phone from Meschak and knowing he would use violence in order to steal it.

"As a result of his actions another young man is dead."
Posted by SEO Services in London | 02:50 | Labels: London News, London Services | No comments