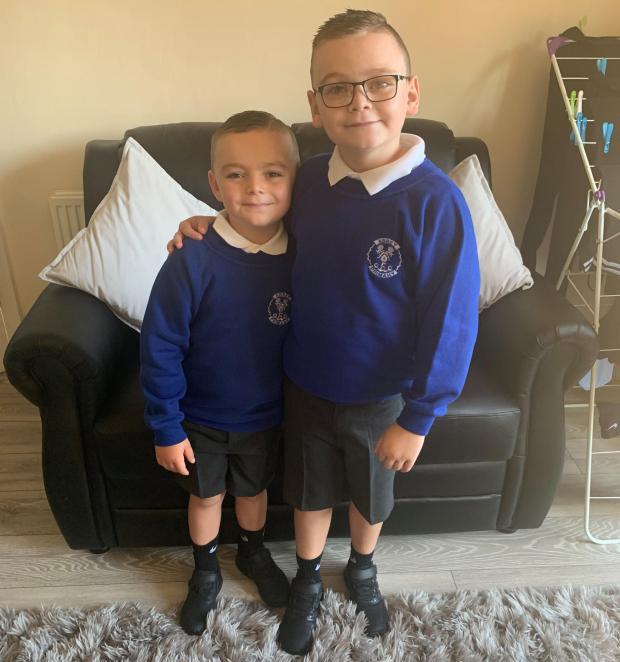 Charlie and brother Freddie ready to go back to school

While other children enjoyed the school holidays, a young boy from Morden faced a summer of gruelling chemotherapy.

But a third reoccurance of his brain tumour didn't stop brave Charlie Cox from returning to school on Tuesday.

Eight-year-old Charlie joined his year four classmates at Abbey Primary School, despite currently receiving chemotherapy for his tumour, a grade 2 oligoastrocytoma, which was first diagnosed when he was just eight months old.

His mum, Kirsty Court, works at South Thames College Merton Campus and described the "heart-breaking" feeling of being told the tumour had returned.

"In his short life, having gone through two operations and chemotherapy, I thought he’d suffered enough," the 32-year-old said.

“I’ve learned that whatever happens, life goes on, and my focus is to keep things as normal as possible for Charlie and his four-year-old brother Freddie, who also attends Abbey Primary School.
"Charlie is coping well with his 12-month course of chemotherapy, which began on July 31.”

Kirsty with Charlie and Freddie

The Morden boy has faced countless hospital appointments, operations and chemotherapy throughout his childhood.

With the tumour located on Charlie’s optic nerve, any further surgery could leave him with irreversible damage to his eyesight.

“Now Charlie is older he understands a lot more about his illness and he’s got a very mature head on his shoulders," Kirsty added.

"He has anxiety about his tumour but tries to take each day as it comes."

And what does Charlie think about all of this?

Well, like any child his age, he just wishes he were out playing with his friends.

“It’s rubbish going to hospital in the holidays when I’d rather be doing fun stuff," Charlie said.
"I’m excited to go back to school and see my friends again.

"I’ve got lots of friends and they’re really nice about my illness. I’m looking forward to showing them my cannula when I have it in on treatment days."

Together with Brain Tumor Research (BTR), Kirsty is hoping to raise awareness in the hope future kids won't have to go through the same struggles her Charlie has.

Michael Thelwall, head of fundraising at BTR said: “We wish Charlie the best as he goes through chemotherapy and thank Kirsty for helping us to raise awareness.

"Charlie’s story reminds us that brain tumours are indiscriminate and can affect anyone at any age.
"What’s more, historically just 1 per cent of the national spend on cancer research has been allocated to this devastating disease. We cannot allow this situation to continue.”

If you have a back to school story that you would love to share, email: riley.krause@newsquest.co.uk
Posted by SEO Services in London | 11:20 | Labels: Local News, London News | No comments