'Misleading' Deliveroo ad banned as service does not deliver everywhere

A video grab from the Deliveroo ad. Photo: SWNS

A Deliveroo ad that boasted the food delivery service was available “wherever you want” has been banned for being "misleading".

Watchdogs launched an investigation into the TV ad following complaints from more than 20 people that Deliveroo did not deliver to their areas.

The 22 complaints were upheld by the Advertising Standards Authority (ASA) which found it breached regulations regarding misleading advertising and qualification.

The ad was banned from being shown again, and Deliveroo were told to ensure future ads did not claim or imply that delivery was unrestricted throughout the UK.

Deliveroo acknowledged there were locations which they did not currently cover, but believed the words “some restrictions apply, obviously,” which appeared at the point where the voice-over stated that Deliveroo was available “wherever you want,” made clear it would be unable to deliver in certain locations.

The ad, screened in March this year, showed people using the Deliveroo app to have food delivered to them in unusual locations or circumstances, including an astronaut in space and a prisoner tunnelling underground to escape from jail.

An ASA spokesman said: "We considered viewers were likely to interpret the claim 'Order what you want; where you want; when you want it' to be referring to the choice of food, geographical availability and choice of timing of delivery from Deliveroo.

"Given the absolute nature of the claim and the absence from the claim of any additional explanation, we considered they were likely to expect that those features of the service, including availability, applied throughout the UK without restriction.

"We acknowledged the appearance of the qualification 'Some restrictions apply, obviously'; the use of settings that would be seen as fantastical; and the ability for consumers to check whether or not Deliveroo delivered in their area before placing an order.

"However, we considered the very clearly fantastical nature of the settings was likely to lead viewers to interpret the qualification to mean that the restrictions applied to places where it would be ridiculous to expect to be able to access the service, rather than that there were certain areas of the country that were excluded. 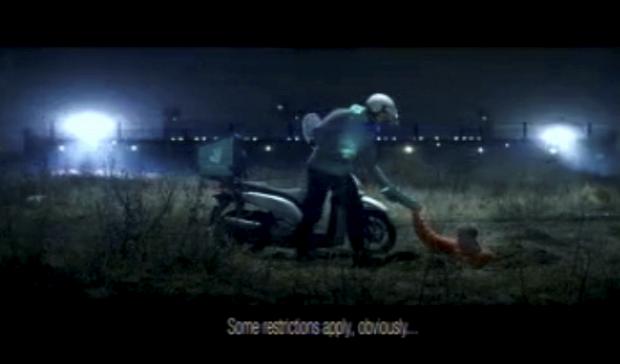 "Given the expectation set up by the ad, we considered it was not sufficient to make consumers aware they would need to check for availability in their area.

"Because we considered the ad suggested delivery was unrestricted throughout the UK when that was not the case, we concluded that it was likely to mislead."

He added: "The ad must not appear again in the form complained of.

"We told Deliveroo to ensure their ads did not claim or imply that delivery was unrestricted throughout the UK unless that was the case."
Posted by SEO Services in London | 11:33 | Labels: Local News, London News | No comments