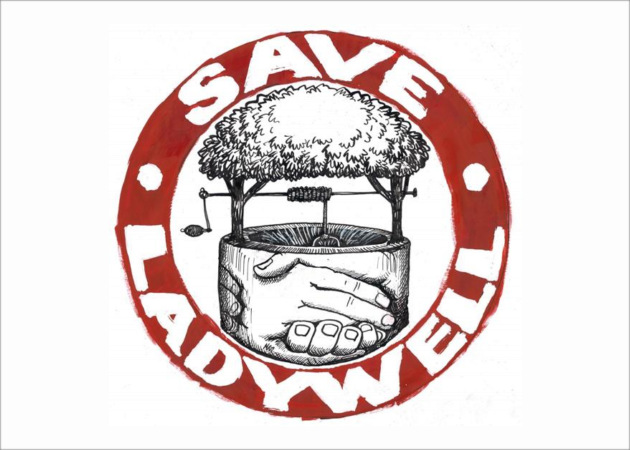 The Save Ladywell logo, designed by Martin Rowson

New proposals to re-draw council ward boundaries in Lewisham suggest creating one ward of ‘Ladywell Brockley’ which will run from St Johns down to Crofton Park.

The suggested boundary has been re-drawn after a meeting of about 150 Ladywell residents gathered on August 27 to oppose initial proposals to break up the Ladywell ward.

Martin Rowson, a Guardian cartoonist and Ladywell resident, designed a logo for the Save Ladywell campaign.

A statement from the Brockley Society on the new boundaries said the group has “major concerns.”
The statement read: “There has been no proper consultation on this extremely important issue, which affects every single resident, particularly in the five wards where major changes are proposed.”

The Society added that leaflets and newsletters distributed to residents by the council were not a proper or effective consultation and described a meeting at the civic centre on August 16 as "a farce."

The statement continued: “The proposal to abolish Ladywell ward altogether was ludicrous, displaying complete disregard for its history, community identity and organisations.

“The new ‘Ladywell Brockley’ proposal is equally ludicrous and poorly thought through, for the same reasons.”

After Lewisham Council initially proposed splitting up Ladywell last month, residents in the ward quickly organised to reject the proposals.

Bill Jefferies, 54, told News Shopper: “It was total shock because Ladywell is a very established community.

“It has got a community identity centred on the Village and the Railway and Ladywell Fields, so to say that shouldn’t be represented in the Council is extremely serious.”

When carrying out a boundary review, three factors must be taken into account: making sure wards have a largely equal number of voters; sense of community; and convenient and effective government.

After residents opposed the proposed changes, a Lewisham Council spokeswoman said: “After hearing from local residents about the strength of community identity in Ladywell, we have altered our submission so that Ladywell Village remains within one ward.”

However, The Brockley Society has disputed the idea that Ladywell and Brockley can be drawn up into one ward.

“Brockley Ward, including the large Brockley Conservation Area (second largest in the borough) is an integrated geographical area in its own right,” its statement read.
News Shopper has contacted Lewisham Council for further comment.
Posted by SEO Services in London | 14:40 | Labels: Local News, London News | No comments